Gifts: Similar to tree ornaments, the Victorians started months ahead making presents for one another. The homemade gift was considered more thoughtful and meaningful than a store bought one. For the adults, presents might include: Apron, stationary, muffler or scarf, jewelry, magazine subscription, handkerchiefs or scarves, combs, needle-case, watch case, pomander ball, plant, photograph frame, book marks, cookies, jams, jellies or sweets. Some of the same presents would be suitable for a boy or girl. Boys gifts would include sled, skates, model train, shoeshine kit while a girl would receive dolls and accessories, hair bows etc. http://www.biblicalquality.com/Christmas8.html

As noted in last week’s post, the feast was the gift initially. However, with the arrival of the industrial age, manufactured toys became available and gift giving expanded.

Wrapping: In Charles Dickens’ A Christmas Carol, presents were wrapped in brown-paper. However, as the holiday grew in popularity, gift wrapping expanded. Presents were wrapped in colored paper, tissue or cloth with ribbons to complement. “Christmas papers were intricately printed and ornamented with lace and ribbon. Decorated boxes, loose bags, and coronets bore cutout illustrations of Father Christmas, robins, angels, holly boughs and other seasonal decorations.” How is wrapping paper made.

An interesting aside- tissue paper was a spin off of toilet paper. Introduced by Joseph Gayetty in 1867, by 1863, it was commonplace enough for Butterick to use it for the newly invented sewing patterns. Learn more about gift wrapping. Other wrapping ideas:

Greens-Centerpieces, wreaths and swags: Christmas was a time to bring the outside in. Pine cones would be gathered, greens would be cut and if there was no holly berries, the Victorians would dip beans into red wax.

The dinning room table would be set with a tablecloth or runner. Candles would be lit and greens or flowers would be a focal point.

One year, having no centerpiece, my brother-in-law, who is an artist, went outside and cut a variety of pine branches. He laid them in the center of the table, placing glass tree ornaments on top of them and adding two candles. It didn’t take him more than 15 minutes to make, but it looked terrific. You can make a centerpiece using a vase or container of some sort to hold greens. For inspiration, check out 539 Victorian Christmas Decorating Dining Design.

I’m fortunate as I live where there are lots and lots of pine trees, so I can pretty much go outside and cut all that I need. I’ve been making swags for doors by taking a bunch of greens and wrapping them together with floral wire. Since I also have a lot of pine cones, I’ve been tying ribbons around them and draping them down the front of the swag. The whole thing is tied off with ribbon.

If you don’t have pine readily available where you are, the Dollar Store has plenty of faux greenery that can be cut up and used in a similar manner. They also sell bags of pine cones, which can be touched up with white paint to look like it’s been snowing. 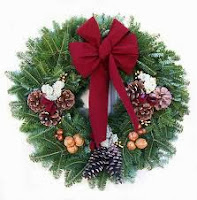 If a wreath is more your style, check out the following links:

• Victorian Farm Christmas How to Make a Wreath

Posted by Margo Caulfield at 2:35 AM