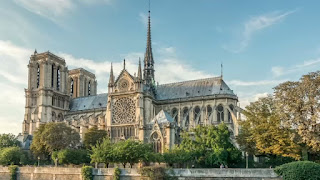 Paris is one of my favorite cities and on my first view, when exiting the Metro was Notre Dame in all her glory. It rained while we were there and I wanted to rush down to the Cathedral is see water coming out of the gargoyles mouth. Actually that no longer happens, as there are various pipes that take care of this.

Interestingly I’ve done several “take a breaks” that feature Notre Dame. One was on the difference between gargoyles and chimeras. A true gargoyle is basically a drainpipe, designed to get water off the roof and away from the building. There is a trench in the gargoyle and the water typically comes spurting out of there.

Often referred to as gargoyles, the creatures perched on the balcony of Notre Dame are actually “chimeras,” which are mixes of different types of animal parts.

My favorite view was from the back as I loved the flying buttresses, that support the walls.

In honor of the 100th anniversary of the end of WWI, Notre Dame mounted the most incredible light show. While it’s in French, it’s an amazing spectacle.

The 25-minute display, "Dame de Coeur," tells the 800-year history of the cathedral through LEDs and 3D video mapping and was shown twice a day. On a battlefield in 1917, the show opens with an injured American soldier who tells a young French nurse he regrets never visiting Notre-Dame. The event seeks to demonstrate the incredible history of the building, through the lens of the tragedy of WWI, and especially in homage to the American soldiers who fought in France during the country’s time of deep peril.

Not interested in today’s activity, go to the Take a Break Pinterest and pick out something else.
Posted by Margo Caulfield at 3:05 AM