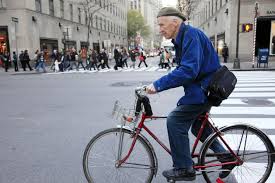 Until his death last week at 87, Bill Cunningham was the street photographer who rode his bicycle around New York City wearing a blue janitor's jacket and snapping photographs for his New York Times column “On the Street.” According to Designer Oscar de la Renta, “More than anyone else in the city, he has the whole visual history of the last 40 or 50 years of New York. It’s the total scope of fashion in the life of New York.”

I became enchanted by Bill Cunningham when my youngest son encouraged me to watch the documentary about his life. Recently I had a meeting with a reporter from the New York Times and I asked him if Bill Cunningham was as magical as he appeared in the film. He assured me that he was. Being part imp and sprite, he enlivened the newsroom whenever he was around.

What was so inspiring about Bill was his total love and involvement with his work. If there was ever a person who commuted to “fun”, versus work, it was him. As my older son noted, after watching the film, “I want to find something I’m this passionate about.”

So if you don’t know Bill’s work or amazing photographs, read the The New Yorker’s article about him from their March 16, 2009 issue.

• See your community from Bill’s eyes-go out and snap photographs of your neighborhood.
Posted by Margo Caulfield at 6:14 PM